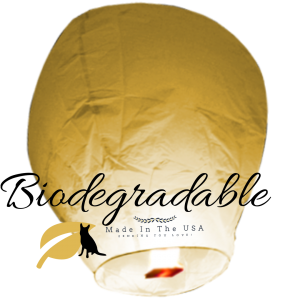 Clean up; We track our lanterns flight travel with 4 drones, Mavic 2 Pro and The Zoom, and send out a clean up crew to where they land to retrieve them. If one were to be missed, it’s biodegradable so it causes no harm to the environment as it breaks down rather quickly, especially if it rains.
Where do they go once cleaned up? We recycle and reuse the bamboo in other projects.

Safety; Today’s Sky Lanterns pose no harm to animals or the environment as they are not made with the materials of the past as claimed in other countries. We do not attempt to release lanterns when the wind is above 7 mph, we do not release them in the rain, or in extreme heat, or when there are burn bans in effect. Sky Lanterns are like hot air balloons, the fire is used for them to take flight, and the lantern doesn’t begin to descend until the fuel cell is barely lit, therefore they will not fall prematurely and catch anything on fire. We cannot vouch for lanterns made in china, as ours are made by an American company.
We watch the weather very closely and will reschedule an event if weather conditions are not right to release them. We also send out a video instructing attendees how to properly light and release their lantern, as well as demonstrating during the event.

You’ve seen the image with the Owl harmed, is it real or fake?

These images are fake, they’re staged and photo-shopped by orgs that need an issue to stay in business. We’ve conducted our own tests with lanterns, and animals, stay away from them. Birds do not fly into them to get trapped, and an Owl setting deep in a tree, well that lantern even if it fell into a tree isn’t going to make it down to the Owl.
Allow me to educate readers on the largest LEGAL scam ran in the United States for many years. NON PROFIT ORGS like those against Lanterns.
By Law, a non profit can pocket up to 85% of ALL donations they take in, as long as they don’t tell donors exactly what percentage of those donations go for exactly what. So say the cancer walk, RSPCA, PETA, etc say they donate a percentage to this and that but don’t list exactly what percentage goes for what, it would be legal for them to pocket up to 85 %, which most non profits do.
https://www.charitywatch.org/charity-donating-articles/supreme-court-rules-that-fundraisers-who-don39t-lie-can-pocket-85-of-donations

But how can you find out exactly where every penny goes when donating to a Non Profit?

By law, a non profit MUST give you a copy of their previous financial records when asked for them. Also don’t allow them to give you their basic filing information, ask for their itemized records that will show you exactly how much they bring in, how much the director and other employees salaries are and all expenses paid out. The best place to get the full information is from the IRS as some websites like the one listed above does not actually provide proof of the orgs they list’s, financial records. If a non profit refuses to release their records, you can file a complaint on them and request a formal audit be performed.
To continue to run and collect donations, these orgs have to have something to fight against, or fight for, and many will create fake issues just to line their pockets.

Being added to this blog is a video we made showing Lanterns will not catch a house on fire even if it lands on your roof, tree, or on land. And you can do your own research that will show you they’ve never harmed animals. All you’ll find are the fake articles with the owl Photoshopped in. We may start a class to show everyone how to spot Photoshopped images and that owl is definitely Photoshopped and horribly done at that.

Check Out Our Color Run